I am just going to admit it. Everyone is going to hear about it sooner or later. And, yes, I am ashamed. So, here goes…

I squirted Waldorf. Intentionally. In the face. With ice cold water. And it was 20 degrees outside.

Mornings in our house are bedlam on a typical day. There are cold drinks, hard boiled eggs, and yogurts to add to snacks and lunches. Too few sips of coffee to consume, 4 kids to wake, 2 to help get dressed, 4 to feed, 2 whose teeth need brushing by an adult, and 2 cats to be fed. I also have to throw some clothes on myself and try to scarf down a few bites of something that can qualify as my own breakfast. These are the things I have to do. Things I like to do before this chaos begins…pet the cats, have 2 sips of coffee (preferably uninterrupted by little footsteps coming downstairs), and listen to Howard Stern (but only Monday, Tuesday and Wednesday, damn his new schedule). All of the above needs to be finished by 7:30AM so that I can drive the kids to school for their 7:50 start time.

A typical day means B&B is here. On this particular morning, he had left for work before the rest of us awoke. I’d planned to head straight to the gym with the Verb for TRX class (holla!) after dropping off the 3 stooges at school. So, I threw sweats on over my tights and tank and grabbed: a towel, several snacks for the little man, a Gatorade and my water bottle. While dressing, I called down to Waldorf and the Kenyan, “Is your homework in your backpacks?” I heard indecipherable mumbles. “Are your shoes on?” Mumbles again. “Coats?” Silence. At this point, I had a toothbrush hanging from my mouth, “Gentlemen, please have your coats, shoes, hats, and gloves on by the time I get downstairs.” I hoped to hear, “We’re ready Mommy!” Because this is a dance we do every morning. And you’d think they’d have learned the steps by now. Did I mention they are boys? Instead, I heard, “Give it BACK!”, “Stop it! STOP IT!”, “Stop following me!”, “It’s MINE!!” 3 different voices. 4 different complaints. Can mean only one thing.

His silence confirmed my suspicions. I came downstairs to find 4 boys, 3 in or near tears, 1 with a guilty look on his 10 year old face. And none in shoes, coats, hats, or gloves. Tick…tock….tick….tock….tick…tock.

I am not a yeller. Or a spanker (come on, you know they’re still out there). In a quieter voice than usual, I revoke privileges from the offenders, like a sniper picking off his targets with deadly accuracy. “Waldorf, you will have no dessert this evening.” I have been on a baking tear recently, and my brownies from scratch are word to ya mutha, so I know this is a particularly tough pill for my oldest to swallow. The coveted brownies may be gone by tomorrow. B&B loves them. And Waldorf knows this. They all silently and quickly pulled shoes, coats, hats, and gloves on before I handed out anymore death sentences.

4 boys filed out to the freezing car, which I’d forgotten to warm up. Rat farts. Cue the string of, “I can see my breath!” “It’s so freezing I can’t buckle myself!” “Why is it so cold in here?” “Why didn’t Daddy start the car?” I quickly started the car, and then ran back inside to grab my handbag, gym bag, make sure the felines were fed, and lock the door. Tick…tock…tick…tock…tick…tock.

From my kitchen, I heard the high pitched screaming of what could only be a cat in heat. Strike that, multiple cats in heat. Very loud and horribly high pitched. Must be some strays in a neighbor’s yard. I walked to my front door to discover the cats were in fact my sons. Screaming as loud as they could, in voices as high as they could muster. At 7:32AM.

From the front door, I caught the eye of Waldorf and the Kenyan. I made the finger across the throat sign. Universally understood as “I’m going to kill you” or “Cut it out. Right. Now.” Either message would suffice in this instance. The cat calls continued.

I walked to the car, and calmly dropped the hammer, “Gentlemen, none of you will be enjoying dessert tonight.   And everyone will be going to bed 15 minutes early.”

Waldorf couldn’t help himself. “But, why?”

Before I could formulate an “I said so, that’s why” or some version of that ridiculous gem, my fingers had wrapped themselves around my water bottle and I had taken aim and squeezed. My ice cold water hit him square in the face. He blinked, stunned. I blinked, equally stunned. The Kenyan started to laugh, which I brought to an abrupt halt as I slung my weapon and locked my deadly aim on his face. “You want some of this too?” (A ludicrous statement, I am aware. My choice of words immediately triggered in my brain the scene in Meet the Parents, when Ben Stiller is caught on videotape with his karate chop action, saying, “Jack, can you deal with THAT?”) I digress…“No, Mommy,” the Kenyan whispered. 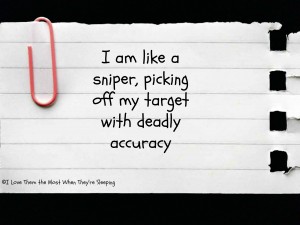 I disarmed myself and offered Waldorf a napkin with which to dry his dripping wet face (before frostbite set in). We drove silently to school. My immediate thoughts were, “Finally, something shut them all up. He certainly had that one coming. What did he expect, after questioning my authority?” 5 minutes into the alarmingly quiet drive, my thoughts became, “Poor guy didn’t know what hit him. He sure took it like a man. Like a face full of polar bear plunge.” By the time I had reached the school drop-off circle, I knew I had to apologize.

As I turned to kiss him goodbye and wish him a good day, I said, “Listen, Waldorf, I love you. I am proud of the boy you are.  I’m sorry I squirted you. You didn’t deserve that. Mommy really lost her cool.”

He hopped out of the car, seemingly unaffected. Phew. Minimal parenting damage.  I smiled at him, relieved. He smiled back at me. What a great kid.

That little apple fell straight from his father’s tree.