I have a teenage son.

It gives me pause to say it aloud.

Just like I stumbled over the words “fiance” and “husband” when I first spoke them, there is something surreal about hearing myself admit to having a teenage son.

He certainly looks the part.

When he sleeps, he takes up the entire bed. He throws his long, toned arms overhead in repose. Even on the coldest nights, the covers are cast off, and he dons the obligatory teenage sleepwear–gym shorts and an oversized t shirt.

When did he last wear pajamas? A year ago? Two years?

There are no pajamas in the land of 13.

When he stands, 13 is tall enough that I have to look up to meet his eyes, indigo like his Father’s. They share the same broad shoulders and enviably long legs. I know those legs by heart. I see them every day as 13 maintains his three-stride-ahead-of-me distance. He carries himself with just as much confidence as his Father and a touch more humility.

Is it wrong to hope that’s my doing?

13 has an upper lip in need of its first shave.

He ambles around in a men’s size 11 shoe.

He grunts more frequently than he speaks.

When he does talk, his voice is so deep that–when I hear it from a room away–I wonder which of my children let the strange man into the house.

I am negotiating with 13 as I write this. He is painfully private, so I feel it’s only right to ask his permission before writing about him. His reply? “You may write about me. But it will cost you.” He lobbies for a YouTube account. I have something less permanent in mind. Like a chocolate milkshake.

Negotiations remain at a standstill.

I am puzzled by 13 as I write this. He would eat buffalo chicken sandwiches every day of the week if I let him. And chase it with a jar of olives. I find wrappers in his pockets from packs of Mentos. Mentos. Are they back? Were they ever really in?

13 fills every blank space in his first grade brother’s My Book About Me with the word “poop.” All 63 pages.

13 ducks when I reach out to fix his hair. He allows me to kiss him goodbye and goodnight, but he rolls his eyes almost every time I do it.

13 removes the tank lid from the toilet, assesses why it won’t flush, and remedies the problem in under a minute. Yet he wants me to spread cream cheese on his bagel.

13 prefers to stay home and watch Jimmy Fallon clips rather than accompany his buddies to a middle school dance. “Why would I ever want to go there?” he asks.

“I know what that means,” I whisper my husband. “It’s The Girls. He isn’t ready to be around The Girls yet.”

Rinse (really well. And, I beg you, rinse again) and repeat.

I know this boy.

Except maybe I don’t. Because one day, he rolls in and announces he tried out for a part in the school play. And he’s made it. He doesn’t remember which part he got, but it’s a big one.

The one thing he is specific about?

“The Girls. There are lots of them,” he smiles and raises his eyebrows as he relays this.

So maybe he is ready…it just needs to be on his terms.

I am frustrated with 13 as I write this. When I reach under his bed in search of a missing  Nike Elite sock, my hand brushes his laptop. His school laptop. Which he should have with him right now. Because he is at school. I am frustrated not because he has forgotten it. In a house with five males, things get forgotten. I am frustrated that his laptop is in his room when we have a clear no-electronics-in-the-bedroom rule. A rule he continues to break.

I don’t find the overpriced sock. Instead I find the security blanket that was his comfort and constant companion through the first years of his young life. To anyone outside our immediate family, it looks like a rag collecting dust. For me, it’s like bumping into a dear old friend. It is his Velveteen Rabbit, the most treasured item from his childhood.

Has it been abandoned? Outgrown and forgotten like Jessie in Toy Story? A movie we watched together a decade ago while he sucked his thumb, wrapped in that very blanket and snuggled on my lap.

Or does he leave it under his bed on purpose? Does it comfort him at the end of each day to know that it still exists and is literally within his grasp?

I know better than to ask him. His answer would come in the form of Sarcasm. 13 speaks it every hour of every day. Except for the thirty minutes before he goes to bed. Which coincide with the thirty minutes I’m most mentally and physically drained. He is quieter than ever–if you don’t count the grunting–so when he speaks, I try to listen. It’s then that he allows the mask to slip, and I glimpse the young man who wants to do right. By himself, by his parents, by his brothers, by his teachers, by his friends.

We speak in hushed tones in darkness, save for the faint glow of a street light that casts a single beam through his bedroom window. Comforted by the shadows, he breaks down the difference between cool and uncool. Listening to him, it occurs to me that cool is not just an adjective. It’s a verb, it’s a noun, it’s an adverb. It’s the object of every 13 year old preposition. The gap between his definition of cool and mine would take several oceans to fill. It’s the difference between having experienced life and having one’s entire life still ahead of him.

He explains why he doesn’t text an old friend as much and that it doesn’t bother him.

Confides that one girl is not as friendly in his eyes as another, but he is in no hurry to speak to either of them.

I answer questions if he asks, and rail against the voice in my head that aches to turn every moment into a teaching moment. It is the most well-intentioned part of me. It’s also the part that shuts him down most quickly.

I walk away from those insightful nights with a better understanding of where 13 believes he resides in this world. He wants to fit in, but is not uncomfortable standing out.

It’s not a bad place to be.

I am captivated by 13 as I write this. He is our oldest child. His firsts are our firsts. Ours is a complicated dynamic because 13 has three younger brothers. It’s noisy. It’s smelly. It’s snacks all the time. There is bleeding. We have stitches. My husband and I have little confidence in our ability to anticipate what 13 needs because this is the first time we’ve parented 13.

Hello, how do you do?

…while begging him to do others…

“Please change your socks. Every. Day.”

“Please wait to tell me this story when we are not around little ears.”

13 enjoys his math teacher so much that he agrees to spend his Sunday afternoon volunteering at a school open house simply to spend more time with him.

For all of his grunting, 13 grows animated when the subject of Santa Claus arises. This is his fourth Christmas in the know, but you’d never guess by listening to him regale his younger brothers with stories of that time he heard reindeer on the roof. He’s no readier for the magic to end than we are. We are bonded in our enthusiasm to keep the littles believing.

When we go out in public and I have the wherewithal to step back and let him take the lead, I am able to appreciate the young man he is becoming.

He is clever. Well spoken. Smart. He engages comfortably with adults. He enjoys people and wants to put them at ease. He is an old soul. He reminds me of the things I love most about my Dad. 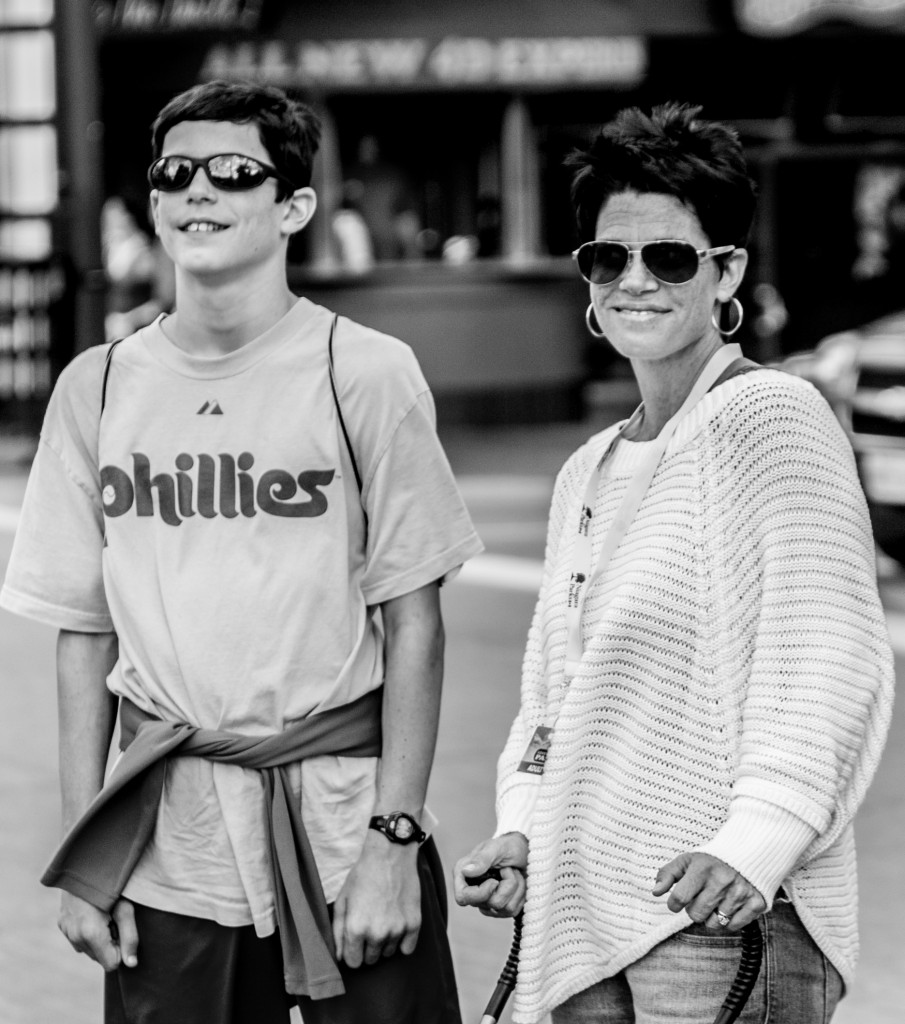 Yes, I miss when his hand was little, and it fit so perfectly in mine. I miss the way he climbed onto my lap. I miss hugs initiated by his little arms. I miss singing him a lullaby every night.

It is watching The Walking Dead with him, but knowing, no matter how much he begs, he is way too young for Homeland.

It’s skimming the last hundred pages of Stephen King’s 11/22/63 because I can’t wait to give it to him to read next.

It’s intentionally sitting next to him on a haunted hayride so that I can seek refuge behind his broad shoulders.

It’s talking more candidly about health and human sexuality because I want him to be informed, be safe, be respectful, be happy. I want him to feel normal.

He remains three strides ahead of me on the sidewalk.

I’m no longer the central character I was in his story a mere decade ago.

13 feels compelled to walk his own path. His need to brave it on his own transcends my desire to be alongside him every step of the way.

Where I fit into his life is not his concern.

That I am here is all he needs to know.

I will not look to close the gap between us.

For now, I’ll stay out of sight, out of mind–yet still within arm’s reach at the end of the day.

It’s not a bad place to be in this surreal world of mine.

Now that I have a teenage son.

This is the third installment of This Is Adolescence. It is a true thrill to be a voice in this writing series. Thanks to Lindsey Mead and Allison Tate for having me. Lindsey kicked off our series with a beautiful look at age 11. Allison followed with insight about 12 that so paralleled my experience with 12 that if I didn’t know she lived in Florida, I’d believe she were my very own peeping tom right here in Philadelphia. I’m looking forward to reading ages 14 through 18, written by Catherine Newman, Jessica Lahey, Marcelle Soviero, Shannon Duffy, and Lisa Heffernan.