I hold some tenure at the baby pool. I’m not proud of it. I’ve sat knee deep in urine water, eyes rolling back in my head with my heart in my throat for eleven consecutive summers as my family of three inexplicably (I’m serious, Dad, I have no idea how it happened) grew one by one into a family of six.

Here are the lessons I’ve learned at the baby pool…

When your child is in the baby pool, you sit in the warmest of waters and watch as he mouths the plastic giraffe that a little girl just extracted from her swimmy diaper…the swimmy diaper her Mom is now changing on the grass because it’s full of poop. Poop that has disintegrated into 4000 individual particles. This indicates she pooped on the drive to the pool and has been in the pool wearing that poopy diaper going on 2 hours. So you can expect a raging case of hand, foot, mouth to hit your house by tomorrow. Despite this knowledge, you scramble from the water to offer her Mom an extra diaper because she’s just realized she left all of hers at home. 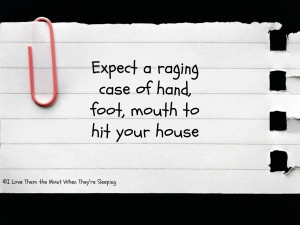 When your child is in the baby pool, you subject yourself to an oversized, colorful beach ball hitting you upside the head. Thrown not by your son, but by an enthusiastic 3 year old you’ve never met…and then you have a 20 minute catch with said 3 year old. You buy him a popsicle from the snack bar when you buy your kids’ popsicles, because he’s now practically your nephew. You wipe his hands and face after he’s sat on your lap dripping his red popsicle all over your Lands’ End bathing suit…your white Lands’ End bathing suit. You call him Henry, even though his name is Harry, and he answers to it. Between the beach ball, the popsicle, and the fact that he’s nearly impossible to understand, he forgives your mistake.

When your child is in the baby pool, you drink 47 cups of make believe tea with two little girls…one girl pours each of those cups from a lavender Disney Princess tea kettle with painstaking precision. And one girl gives you two lumps instead of one, and milk instead of cream with her tiny, delicate hands for each of those 47 cups. You blow on your last cup of tea just as convincingly as you did your first cup. And the girls giggle just as loudly and earnestly as they did the first time you blew on it.

When your child is in the baby pool, you are nonplussed when a 14 month old who doesn’t share your last name uses your breasts as handles to steady himself as he navigates the slippery floor on two legs still unaccustomed to supporting his weight. You fix his hat, applaud his efforts, call him “sweetheart”, give him your biggest smile, and clutch him against you in a hug after he places a wet, open-mouthed kiss on your unsuspecting lips. A kiss from which you surmise he’s recently eaten hummus.

When your child is in the baby pool, you have an ongoing conversation with another parent whom you’d never be able to identify in a lineup because you’ve made absolutely no eye contact…your eyes are trained on your own children. Or you sit next to another adult, neither of you initiating any conversation, for 6 straight hours…because your eyes are still trained on your own children.

When your child is in the baby pool, you silently curse the 10 year old who splashes in and grabs the Dora kickboard, because where on earth is her mother? She’s entirely too old to be in this pool! Until your own daughter, who’s 10 years old, slips into the baby pool to play alongside her 3 year old brother. And they share a moment of magic. And you’re not ready to tell her to get out of the pool just yet…can’t the magic last a tiny bit longer? How did you not realize back then how young and beautifully innocent a 10 year old still is?

When your child is in the baby pool, you leap from the side of the pool and cover 20 feet in two strides with the grace of a gazelle to grab the little boy who’s just slipped silently under water. Because his Mom has turned away for an instant to drag his screaming older sister out of the pool and put her in time-out for yanking the rubber duck from his hands…and you know she will never get to him in time. You pick him up, hold him protectively against you, and run him over to his Mom. She hears his gagging, reaches for him, meets your eyes, and the look of understanding and appreciation passes between the two of you. Tears spring to her eyes, and unable to find her voice, she mouths the words, “thank you”. Tears then spring to your eyes, you rub his tiny back, squeeze her hand, and turn to resume your watch over your children.

When our children are in the baby pool, we are in it together.

*An abridged version of this piece appeared in the Huffington Post on June 25th in the Parents Section.