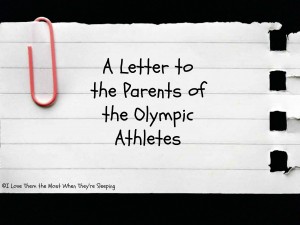 In my mind’s eye, I see him half-dressed, standing in front of the computer, eyes glued to the live feed of the men’s 4×100 meter relay final. I walk down the steps…and confirm my suspicions. B&B, wearing only a pair of unbuttoned shorts and his watch, looks from the computer monitor to me, then back to the monitor.

B&B ran track his senior year of high school. During that season, he managed to run a sub 5 minute mile and break the school’s high jump record. That record still stands over 20 years later. I can pull him away from the Olympic live feed during handball. Track and field? No shot. The fact that we are already late picking the Kenyan up from his friend’s house AND late for a party AND that we’ll see this race on NBC at primetime…moot points, all of them.

I text the Mom of the Kenyan’s friend:

“Fucking B&B watching the Olympics. Be there in 15. Sorry.”

“No problem. They’re playing outside. Take your time.”

I re-read my text to her. Hmmm.

“Just clarifying, ‘fucking’ is an adjective, not a verb in this instance.”

I join B&B next to the computer, catching Usain Bolt’s leg of the race. And, just like that, a new world record is set.

We are a house of Olympic junkies. In the same manner that summer wreaks havoc on our regular schedule, the Olympic games dictate our lives for two weeks every four years. During the summer months, all 4 kids are home with me. All day. Every day. It kills my workout routine. Writing is near impossible. Laundry sits in piles…clean and dirty…in the corners of bedrooms and littering the family room furniture. I find string cheese wrappers in beds. There is too much pizza. Too little fruit. Bedtimes are not strictly enforced. Breakfast happens in shifts…beginning at 6:15 and ending when I warn Waldorf, who’s still in bed at 10AM that, “the kitchen is closing until lunch!” Since July 27, our haphazard summer schedule has become even more so, revolving around swimming, gymnastics, and track and field.

B&B and I are spellbound watching the Olympics. Most of the athletes are kids…teenagers and 20 somethings. They’ve dedicated their young lives to getting to this point. With the support of their coaches, their teachers, tutors, and friends, they’ve achieved a lifelong goal of becoming an Olympic athlete. None of it could have happened without the sacrifice, commitment, and support of their parents.

I loved meeting my newborn sons. In their first hours of life, I held each of them, studying every detail of their unfamiliar faces. I tugged at their receiving blankets to reveal their tiny shoulders. I counted ten tiny fingers and smiled as their reflexive grip tightened around my finger, so enormous in comparison. I unswaddled them to place my hands on feet that had never before touched the ground. Those hours, and the days following, were filled with hope and wonder. Who will this boy be? A soldier? A scientist? A philanthropist? An Olympic athlete? I dreamed big for them. And I hoped all of their dreams would come true.

It’s been 4 years since I held my last newborn…and I can say with certainty that there is not an Olympic athlete in my bunch.

For those parents who did give birth to Olympic athletes…thank you. This summer has been one of hope and wonder for my children as they’ve watched your children compete in the Olympic games.

Debbie Phelps, did you pull down his blanket and peek at your baby boy’s shoulders? Did you sense that they would eventually support the weight of 22 Olympic medals? Your child is a marvel. Thank you for recognizing that putting an active young boy in a pool will result in a tired young boy. Swimming proved a valuable strategy for dealing with Michael’s ADHD. Did you dream when you first put him in the pool that he would eventually become the most recognized face in his sport? He has an intensity in the pool and a quiet confidence outside the pool. As the most decorated athlete in Olympic history, one could argue he has every right to be cocky. The fact that he isn’t makes him even more endearing. I watched you watch him compete. As a mother, I identify with the intensity of watching him race, willing him to do his best. My kids watched your daughters watch their brother compete. They witnessed the pride your girls have in their little brother’s commitment to his sport. These are lessons we teach in our home. Thank you for your family’s example of what that support looks like…even once our kids reach adulthood.

Lynn and Rick Raisman, when you held your daughter for the first time, did you smile when her tiny hand enveloped your finger? Did you hope that it would be the same hand that would catapult her to Olympic gold? Would you have dared to dream so big for this, your first born baby? Aly’s sportsmanship sets her apart. We live in a world in which we’ve witnessed pro golfers throw their clubs in temper tantrums. We’ve seen a college basketball player choke his coach in a fit of rage. When Aly believed she hadn’t medaled on the balance beam, she hugged her coach. She took a deep breath. She remained poised. She sought out Catalina Ponor, who’d seemingly edged her for the bronze, embraced her, and congratulated her on a job well done. She was the picture of dignity. She’s a teenager. Competing at an elite level. In front of the world. The pressure she experiences is unimaginable. She thought her score put her just out of medal’s reach. Yet there it was…her sportsmanship. Her gesture is one I’ve played and replayed for my children. Boys, this is what sportsmanship looks like. My boys will never be Olympic athletes. They will never comprehend the pressure Aly feels. But they’ll know what it feels like to try their very hardest and fall short of a goal. They’ll know the sting of disappointment. Aly’s example of sportsmanship in action at the highest level of competition is a lesson for my children. Pretty sweet that she wound up winning the bronze due to a scoring error.

Sheila and Henke Pistorius, did you unswaddle your infant son and place your hands on his feet…feet that would only be his for a short time? Did you wonder who Oscar would be? 11 short months later, when he lost both legs below the knee, did you know then that your boy had the spirit of a champion? Did you sense, in a way that only a parent knows, that your child was destined to be a role model? That he would grow into a young man whose participation in the Olympics would embody courage? My children have watched your son in amazement. “His blades are cool!” Yep, his blades are cool. But his message is even cooler. No limits. No excuses. Endless possibilities. My husband and I choked back tears as we watched Kirani James, moments after winning the 400 meter semifinal, remove his bib in exchange for Oscar’s. Your son has earned the respect of his fellow athletes. He’s won the admiration of millions. Oscar is a true champion. An exceptional man. And a testament to the triumph of the human spirit.

Every parent of an Olympic athlete has his and her own unique story. While the stories differ, the themes remain the same. Sacrifice, commitment, support. Sacrificing family dinners for practices. Spending nights, weekends, years in a gym, at a pool, on the track. For Natalie Hawkins, sacrifice meant spending two years away from her daughter, Gabby Douglas, so that Gabby could train with the coach she hoped would enable her to fulfill her Olympic dream. The commitment…time, financial, and emotional…to seeing your child’s talent honed to make him one of the finest athletes to compete in his sport is beyond my imagination. The support you’ve given your children to empower them to continue performing with confidence, drive, and excellence to reach the Olympic level of competition…I am in awe of it.

When you held your babies, long before they were Olympians, before you knew they were athletes, did you wonder who they would be? Did you sense you were holding a future Olympic hero in your arms? Maybe, like I did, you simply dreamed big for them…and hoped all of their dreams would come true.

An abridged version of this piece can be found in the August 13, 2012 edition of the Huffington Post.