“Let me take my coat off first so that..” before I can finish my sentence, my youngest son has wrapped all four of his appendages around my leg. He holds on with a vise-like grip.

I walk to the closet, dragging my right leg…said 4 year old child attached to it…behind me as I hang up my coat.

“That’s it. I’m done,” he announces as he tosses his sneakers one at a time into the laundry room. He’s just returned home from playing basketball. His face is a mask of anger.

“Uh oh. What happened?” I ask my husband.

“I’m done. I’m so frustrated playing with these guys. Nobody takes the game to the level I need to play at in order to enjoy it. It’s a total waste of time for me.”

“Who knows? They play like a bunch of old men! Maybe they’re afraid to get hurt or something. I’d rather never step foot on the court again than compromise the way I play.”

“How about Boggle?” he suggests.

“Because I hate to lose. And you always beat me. At Scrabble. And Boggle. That’s why not.”

“This is ridiculous,” he scoffs.

“Stop talking. I’m trying to watch Survivor. Save it for the commercials,” I chide my spouse.

“I wouldn’t be talking if this competition weren’t so absurd.”

I sigh and pause the TV. Thank God for DVR. “Why do you say that?”

He gesticulates wildly towards the TV, “It’s ridiculous that they can’t swallow a grasshopper faster than that! It’s a grasshopper! Just shove it in your mouth and swallow it down! What’s the big deal?”

His chest inflates, “I guarantee I would eat that grasshopper. Not only that, I’d eat it faster than anybody on the show could eat it.”

Oh, here we go. “Would you eat it faster than any contestant on any reality show ever consumed any grasshopper?”

“You too,” I reply, matching my husband’s effort to steady my ragged breathing.

He nods behind him, “I took a wrong turn and ran farther than I should have.”

“I was wondering why I crossed the finish line before you did.”

Because that never happens. Even when he’s pushing 100 lbs of combined weight belonging to our youngest two kids, whom he pushed the entire race in the double jogging stroller.

He offers his hand, “Come on, let’s go over and see how everyone else did.”

I wave him off, “I think I’m going to stay here, thanks.”

“Are your legs beat?” he asks.

“I hurt my foot,” I point to the underside of my right foot, searching for the invisible knife  responsible for the searing pain.

I shake my head, “I wore my racing flats. No arch support. I should have eased my way into them. Never should have raced in them today.”

He winces, “Did you first feel it when you crossed the finish line?”

“Why did you keep on running? You should have dropped out!”

I shrug. “Quitting was not an option. After all, I had all of these strangers to impress.”

He nods, “All of these people you’ll never see again for the rest of your life?”

Perfectly serious, I answer, “Exactly. I didn’t want them to think I’m a quitter. Because I’m not.”

He places his hands on his hips and smiles down at me, “Well, I’m sure they’re all very impressed by your effort. I know I am. Now let’s get you a pair of crutches. Non-quitter.”

B&B yells at the Jeopardy contestant on TV, “Make it a true Daily Double! Bet it all!”

He turns to me, incredulous, “What?! She should bet it all!”

I frown, “If she bets it all and gets the question wrong, she’ll have nothing. If she plays it safe, she’s still in the game.”

He raises his eyebrows, “If she bets it all and gets the question right, she takes the lead. Better to bet it all and take the lead.”

“Nope. Better to play it safe and stay in the game.”

“We need to discuss this,” he balances the kids’ dirty plates on his forearms and follows me to the sink.

“Yes, now!” My husband is nothing if not persistent.

I sigh, placing my hands on the counter. “OK, what do you want to know?”

“What do you want done with your body when you die?”

I place my arm around his bony shoulders, “No, honey, I’m not gonna die. Not today.”

B&B turns to our 6 year old son, “We’re all going to die. Probably not tonight. Don’t worry about this, buddy, Mommy and Daddy are just talking.”

I whisper to my husband, “Can we talk about it after he goes to bed?”

He shakes his head, “Now.” Persistent.

He nods. “Well, you better tell your family that.”

“Because what if you die tomorrow? If I tell them you want to be cremated they may not believe me. They’ll know it’s true if you tell them yourself.”

“Alright. Calm down. I’ll tell them.”

“Hey, Mom, you have to come over here and play this game with us!”

I walk over to stand next to my oldest son, who is almost shoulder to shoulder with me. He is watching his father play a game on the iPad.

I peek over Waldorf’s shoulder. B&B is tapping out a pattern on the game’s 4 different pie-shaped colors…blue, red, yellow, green.  Recognition sets in, and I laugh immediately. “Is that Simon? The memory game?”

B&B looks up to meet my eye. His laughter echoes mine. “Yes! Do you remember this?”

Waldorf nods, “Sure! It’s Dad’s turn now. Then my turn. Then yours.”

“Slow down, dude. Just get the pattern right,” I say.

Waldorf shakes his head, “No, he’s right to go fast. You get more points for speed.”

Now B&B looks at Waldorf. Two sets of eyes alight with the excitement of this additional pressure.  Deflated, I watch their delight.

“I’m out,” I announce. And I retreat back into the kitchen, where the dirty dishes await.

Are you confused yet?

I’ve just finished reading a galley of Top Dog: The Science of Winning and Losing, written by Po Bronson and Ashley Merryman.  And I found it fascinating. 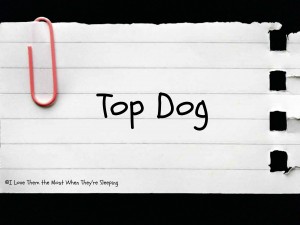 I began this book with a slight sense of dread.  Last year, I read Bronson’s and Merryman’s Nurture Shock, which resulted in a near nervous breakdown after realizing B&B and I needed a complete parenting style overhaul. Waldorf and the Kenyan will likely need extensive therapy as a result of our abrupt shift. The Interrogator and the Verb stand a fighting chance of turning out half decent. (Want to know if your parenting style needs revamping? Read this excerpt from Nurture Shock, which appeared in NY Magazine.)

As I read Top Dog, each of the above scenarios popped into my head in reference to different points made in the book. The research the authors compiled helped me understand the reasons why my husband, sons, and I behaved the way we did in each of these examples. 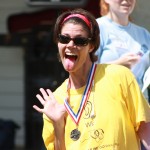 Hey, what’s this? Look who took 1st place in her age group at that race!

In every chapter of Top Dog, I was able to identify instances in my everyday life to which the psychology behind winning and losing applies.

Top Dog: The Science of Winning and Losing is available on February 19th. Po Bronson will be speaking at SCH Academy in Chestnut Hill, PA, at 7:00 PM on Wednesday, February 20th. The event is free and open to the public.

I look forward to meeting him. I’ve almost forgiven him for my near nervous breakdown after reading his last book.

Our This Is Childhood series continues today with the fabulous Allison Tate’s take on Age Five. Allison is the rock star responsible for writing The Mom Stays in the Picture. Her writing elicits such emotion in me. And the pictures that accompany This is Five are priceless.