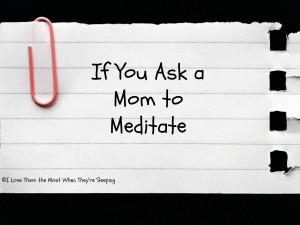 If you ask a Mom to meditate…

She’ll have to close her eyes.

If she closes her eyes, she’ll be at risk of falling asleep.

If she falls asleep, everyone will see her drool.

So, once she closes her eyes, she’ll have to find a way to distract herself from falling asleep.

Before she’ll have a chance to start thinking, a song will pop into her head. It will be that Taylor Swift song, “WeeeeeEEEEE are never, ever, ever getting back together”.

But then she’ll feel sorry for the boy Taylor is singing about because he must feel like Alanis Morissette’s muse right about now.

She’ll want to get that song out of her head, so she’ll clear her mind in an effort to meditate.

But she’ll be sweating. Not because it’s 89 degrees in the room. Because she won’t be able to get Homeland off her mind.

She’ll want Nicholas Brody to be a good guy.

She’ll kinda want Brody to end up with Carrie.

She’ll wonder, Is that so bad?

And she’ll wonder if Claire Danes is really just a little bit crazy in real life.

Thinking about batshit crazy girls will remind her of a line from another song…that Ne-Yo song, “Let me love you until you learn to love yourself.”

And then she’ll think about how sweet a song that is…in sentiment.

But she’ll know in reality that bitch he is singing about is straight up cray-cray.

She’ll wish she could tell Ne-Yo to run away from that crazy broad. She’d say, “Ne-Yo, if she doesn’t love herself, she’ll never love you.”

She’ll want to make a note to explain that to her two older sons when that song comes on again. She’ll know she won’t remember it if she doesn’t write it down or chant it.

But she’ll be unable to write it down, because she’ll be trying to meditate in hot yoga.

And she won’t want to chant it because chanting about Ne-Yo falling for a girl who doesn’t love herself will sabotage the entire yoga class for her.

So she’ll try to think of a way to remember to tell her boys.

While trying to come up with a strategy for remembering, she will become keenly aware that she no longer has feeling in her right ankle.

She’ll hear one of the girls in the row behind her shift her position, and she’ll feel that they are kindred spirits, quietly losing feeling in their extremities together.

She’ll send that stranger behind her a silent, telepathic Namaste for making her feel like she’s not alone in her pins and needles experience.

Thinking about having no feeling in her right ankle will prompt her to think about the two toes on her left foot that go numb when she runs in the cold.

Thinking about running in the cold will make her smile, because she’ll inevitably think about the coveted one-on-one time she gets with her sweet second son, who runs cross country.

Thinking about cross country will trigger the memory that she has volunteered to make orzo with roasted vegetables for his team banquet on Monday night.

Thinking about orzo with roasted vegetables will make her picture her crisper drawer in her mind.

And she won’t see any bell peppers in there.

She’ll wish she could write that down too.

But she’ll be unable to, because she’s supposed to be meditating.

Thinking about writing down bell peppers will make her think about Christmas lists.

And thinking about Christmas lists will stress her out.

Because she has 4 kids, and Christmas will be expensive.

She will really wonder what to get her 11 year old son because he’s at an in-between age.

She is seriously considering the Kindle Fire, but then she’ll wonder if he should have internet access.

Thinking about her 11 year old having internet access will make her think about the phone call she got from his teacher because he Googled “the spinning wheel of death” on his school laptop.

She’ll remember that he explained it to her as that thing that pops up when you’re waiting for a website to load.

Then she’ll recollect how she got up on her soapbox at the school meeting with the IT people telling them that her 11 year old son has no fear on the computer.

She’ll remember that she went on to tell everyone in that meeting that Google is a verb in her house, and she’s worried her son will Google anything. And that maybe he shouldn’t have a laptop.

And then she’ll think, Well, I kinda called that one, didn’t I?

So, that will settle that, and she’ll decide her son certainly doesn’t need a Kindle Fire.

But then she’ll remember that movie quote, “If we don’t start trusting our children, how will they ever become trustworthy?”

Thinking about that movie quote and how it applies to her children will give her a lump in her throat.

She’ll think about what a beautiful lesson that is…and that maybe it’s time to show that 11 year old boy that we trust him.

She’ll feel like she’s maybe going to cry…and she would almost rather fall asleep and drool in yoga class than cry in yoga class.

So, she’ll try to distract herself from that quote by thinking.

She’ll think, What movie was that quote from?

Speaking of movies, she’ll think, when will I get to see Breaking Dawn Part 2?

She’ll think about how part of her is dying to see it, but another part wants to hold off.

Because once she sees it, she’ll think, it will be over.

Not wanting it to be over will remind her of reading the last chapter of Harry Potter and the Deathly Hallows.

She’ll remember devouring the series night after night in her bed.

Then she’ll remember sitting in her backyard, feeling the warmth of the summer sun on her legs and hearing the sound of her tears hitting the open pages of the last chapter of the book.

She’ll remember how she slowed down to savor the last chapter because she knew it would soon be over.

Thinking about slowing down to savor things will remind her of when she was young and the way her brother always saved one of his Christmas presents to open up after everyone else had finished opening theirs.

And speaking of Christmas presents, she’ll think, where should we put the tree this year?

But then, she’ll think, only if they boys agree to white lights.

She’ll remember that last year the Christmas tree was in the family room.

Then she’ll remember that the boys insisted on colored lights on last year’s tree in the family room.

She’ll remember how it was a shit show of a tree, and that they hung all of their homemade ornaments on it to junk it up even more.

Thinking about last year’s ugly tree will make her remember her favorite Christmas tree…the tree she and her husband bought for their first Christmas together in their tiny apartment.

She’ll remember her sister coming over to that apartment to watch movies, drink wine, and string popcorn and cranberries for that perfect tree. She’ll remember how fragrant it smelled and how beautiful it looked, with its popcorn and pine scents and beautiful, twinkling, white lights.

That will make her wonder if she could string popcorn and cranberries this year.

Then she’ll realize that, if her two young sons don’t eat the popcorn every time she leaves the room, the cats certainly will.

Thinking about the cats and the Christmas tree will remind her that last year the cats liked climbing the trunk of that ugly tree with the handmade ornaments and the colored lights.

Thinking about those colored lights will remind her that she really prefers white lights on the Christmas tree.

Then she’ll wonder when her husband will want to string the lights up outside the house.

Thinking about her husband putting up the outside lights will remind her of the time he brought their oldest son onto the roof with him to hang the lights.

Remembering the sight of her oldest son on the roof of the house alongside her husband will make her think about how she wanted to call her husband a moron and a jackass from the driveway.

She’ll remember how she struggled to maintain her composure and not show their son how stupid that stunt was by giving his Dad a come to Jesus right there in the driveway.

Remembering that rooftop incident will make her worry about whether her husband has their oldest son on the roof now while she is at yoga.

The thought of her son on the roof will stress her out.

She won’t be happy about feeling stressed out because she’s supposed to be meditating.

But she’ll be incapable of meditating.

And it’ll be her husband’s fault that she’s unable to meditate because he’s probably having a roof party with their first baby right now!!

Then she’ll hear the fidgeting of the guy two people away from her. And she’ll hear him breathing.

Hearing his breathing will remind her to breathe, which has become a good strategy for calming her down.

She will do this a few more times.

Then she’ll relax and send him a secret, telepathic Namaste, because it was his fidgeting that distracted her from her stress. And his breathing that reminded her to breathe.

She will quietly give herself mad props because she’s had her eyes closed for 10 minutes in the middle of the afternoon in a room that feels like a sauna and she hasn’t fallen asleep.

She’ll think about how grateful she is that she’s taken this time for herself, and that maybe she should try this more often.

And, chances are, that Mom will want to meditate again.