Slap me. If I claim I’m the same parent to my fourth child that I was to my first child, please slap me.

I held my first son eleven years ago and instantly fell in love. I was intoxicated by his newborn smell. I spent days watching him sleep. I devoured the parenting books, since my plan was to be the best mother of all time. As soon as he could sit unassisted, I signed us up for Gymboree class. Before he could crawl, I enrolled us in swim class. The day he clapped, I found the perfect music class for us. We hit the library every Thursday. And I fancied myself a favorite of the librarian since I was the only parent who didn’t smuggle goldfish into storytime. I read him three books every night. I rocked him every evening in the glider, where I recounted for him every single thing we’d done that day. Right down to what he’d eaten for breakfast.

I took myself seriously. And I took my job as his parent even more seriously. The night before delivering my second baby, I stood next to his crib and whispered to my sleeping son, the boy who’d stolen my heart, “I will never ever love another boy the way that I love you.”

Imagine my surprise when baby number two was another boy, and I grew to love him just as much! I tethered the baby to the front of me, and braved Gymboree, music, and library. For obvious reasons, swimming got the kibosh.

I continued that pattern of giving birth to babies and wearing them as an accessory while attending classes I was convinced would boost their older siblings’ social skills until my aching back could take no more. My aching back held up long enough for us to have four kids. All of them boys.

My fourth son has seen and done things to which I’d never have exposed my first son. He’s as nimble as a monkey because he’s never been on a playground that’s age appropriate. He’s three years old and knows every Ninjago, Pokemon, and Harry Potter character. His voice is the loudest in our house because he learned early that it’s the only way I’ll hear him. I’ve taken him to storytime at the library exactly once. We may have been asked to leave.

I still take my job as their parent very seriously. But I no longer take myself seriously.

When the sink is full of dirty dishes, the homework hasn’t been started, the lunches still need packing, it’s bedtime for the younger two, and a new episode of Breaking Bad is about to start…I ask one of the older boys to read their brothers one short bedtime story.

When I can’t muster the energy to bathe them after we’ve spent seven solid hours at the pool, I remember that swimming in the pool (yes, even the baby pool) is the equivalent of bathing in summertime. I gave birth to four non blondes. Nobody’s hair is at risk of turning green. It’s all good.

When my taxed bladder threatens to give out, and I’m in my minivan at Target, I’m faced with a dilemma. Schlep four boys into the ladies room (two of them are borderline too old for that, and the other two will inevitably lick the sink), or toss them Angry Birds on my iPhone while I crawl into the trunk and relieve myself in a Dunkin Donuts cup? I’m going with the cup every time. Ask my kids…they’ve become Angry Birds experts.

I was at the gym recently waiting to sign my kids into babysitting. Ahead of me was a Mom with one son. I watched the seconds turn into minutes, as she, with no sense of urgency, made nametags for: her son, herself, her son’s diaper bag, her gym bag, and her son’s two stuffed animals.  It took her long enough that I had time to mentally review every curse I know. She then held the sharpie hostage while she debated with him who should pick up the stuffed animals he’d thrown onto the ground. When my inner monologue had run out of expletives, I vowed to work more yoga into my routine and smiled at her. I recognized her. She was a Mom with her first son. A boy who’d stolen her heart. She was taking herself seriously…and her job as his Mom even more seriously. I bet she’s never urinated into a cup in her car. 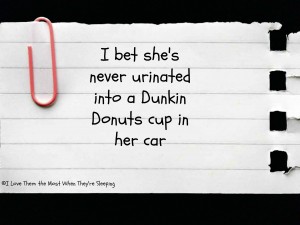 I glanced at my first son, the boy I’d rocked in the glider every night as a baby. He stands almost as tall as I do. I struggled to remember the last time he’s sat on my lap. Has it been a year? I wrapped my arms around his shoulders, which promise to be as broad as his Daddy’s, and took a moment to breathe in the scent of the first of four boys to steal my heart. I am not the same Mom to four kids that I was to one. But I will never ever love another boy the way that I love you.

*An abridged version of this piece appeared in the Huffington Post on July 13th in the Parents section.