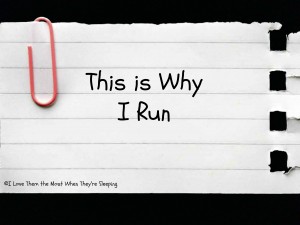 Cancer is a mean son of a bitch. It came for my Dad 8 years ago. While he endured treatment, I looked at my young sons, still in diapers, and I tried to imagine their lives without him. I needed to hurt so I didn’t have to imagine that world for my kids. So I ran. I ran because I hated running almost as much as I hated cancer.

I ran every day.

I hate cancer. I hate running.

And I became a runner.

I run because I’m still faster than my first son….though not for long. I run because I can still run farther than my second son…but he’s quickly closing that gap. I run because my third son wants me to run after him, embrace him, and shower him with the kisses and tickles that only a Mom can give. I run because if my fourth son isn’t strapped into a stroller, he knows only one speed…fast…and it falls on my shoulders to chase him.

I run because I gained so much weight with my pregnancies that I couldn’t run. It wasn’t the kicking of my unborn sons or my need to pee that woke me during the night. It was my desire to shed the imprisonment of the human incubator I had become to run again.

I run because I make kick ass brownies from scratch, and I like to eat them.

I run because, if I hear one more, “Ew, I don’t want this dinner,” I will curl up in a corner and cry.

I run because my second son runs cross country. And I get to train alongside the little boy whose imagination knows no boundaries. And, when I’m running with him, I can take off my Mom hat and splash through the trail puddles with him. Then I can put that hat back on and feel my eyes fill at the sight of this boy I grew from scratch growing up and away from me…the way nature intended but my heart doesn’t yet know how to accept.

I run because being an adult is hard. And being a runner makes it less hard.

Cancer remains a mean son of a bitch. But running….running has become a friend for life.

This post originally appeared on Jennifer Luitwieler’s website on May 1, 2012. Thanks to Jennifer for allowing me to pause from the noise of my life to reflect upon what began as my coping mechanism…and transformed into my lifeline.  Many happy miles, Jennifer…

This piece also ran in the Huffington Post on September 20, 2012 in the Healthy Living Section.