Waldorf. He is my oldest of 4 sons, and our first parenting experiment.  He is a tall glass of water with very pointy elbows.  The kid can eat the house down. He is a physical clone of his father, except for my one trait he inherited…my butt chin.  He is an old soul. Very polite with an old man’s sense of humor. Sometimes a grumpy old man’s sense of humor…hence the nickname “Waldorf”, ode to Waldorf and Statler of the Muppets.  Whenever he comes home from a party, he brings something for each of his brothers…even if it’s already in his possession and he is passing it off as something new. He never forgets about any of them. And that poor kid has a slew of brothers.  When he is not being generous towards them, he is teasing the shit out of them. Individually or as a group, he doesn’t discriminate. Waldorf is our thrill seeker. He is also private to a fault. He sings in the school boy choir, yet I haven’t heard his singing voice since he was about four years old. I know he sings, and I know he’s good, but the bugger won’t let me hear him. He is a packrat. He doesn’t love change. He is a math wizard. He is our chief negotiator. Waldorf loves dessert and video games…not necessarily in that order. He will avoid doing homework at all costs.  Which is why I use dessert and video games as bargaining tools with him.

The Kenyan. He is our 2nd son and looks just like me. He was a nightmare baby. As an infant, he could never calm himself down, so I nursed him around the clock. He was born a year and a half after Waldorf, so I was overwhelmed with Mom guilt that my one-on-one love affair with kid #1 had come to a screeching halt and I now had to schlep this new kid everywhere with us. We have pictures in which I am breastfeeding the Kenyan while sculpting elephants from play doh for Waldorf. One handed. Obviously, I was sniffing glue at the time. Or should have been heavily sedated.  When he was a year old, boy #2 started running in our family room. In circles around the sofa. Every day he would run…sometimes in 10 minute increments, sometimes for a full hour. He usually made sound effects while running but if you asked him, ” Who are you pretending to be?” he’d stop, give you a blank look and reply, “What? I’m not being anyone,” then resume the circular running pattern. He still runs like that every day. In the family room. And makes the sound effects. And the kid never ever gets winded. Hence the nickname, the Kenyan. He is an incredible artist and much smarter than I am. He is a lover of rare animal facts. He is shy around adults. He is a kid magnet.  He is our most emotional. So the Kenyan is the closest thing we have in our house to a daughter. And I will deny it if anyone tells him I said that.

The Interrogator. He will hit you with a barrage of questions in rapid fire succession that will leave you wishing a loud ambulance would drive by and drown out his voice for a moment’s break from it.  He is the sweetest little man. Last spring, he picked up a wishy (white dandelion), closed his eyes and said, “I wish me and my baby will be friends forever and forever,” then he blew on it. His baby is the Interrogator’s little brother, which makes that one of my proudest parenting moments yet. The Interrogator obsesses over things for long periods of time. The obsessions have been (and appear in the order in which they occurred): golf balls, skeletons, Indiana Jones, skeletons again, and currently Lego Ninjago figures.  He is in love with me. I can see it in his eyes, and I love it. (Psycho Mom) The Interrogator is the quirkiest kid I know.  Adults absolutely love him. He drives his older brothers insane. He isn’t the best with names, so he has been known to ask someone 26 times in a 90 minute span, “What’s your name again?” Cue the ambulance please. The Interrogator often makes a whistling sound and yells, “Come here, boy!” to get his younger brother’s attention. The dog, I mean younger brother, comes running every time he’s called like this. The Interrogator then typically assigns the little brother a menial task like, “Bend over and pick up my napkin for me.” I don’t even get involved. I would have gotten involved 2 kids ago. I know better now.

Kid #4 is the Verb. We live right outside of Philadelphia, and boy #4 was born 2 months before the Phillies won the pennant. We frequently get, “Oh, you named him after Chase Utley?” Nope. Chase the verb. Chase as in, “go chase your brothers.” Unfortunately for me, it has become, “Hey, Mommy, chase me while I run away from you in dangerous parking lots while you are fielding questions from the Interrogator and negotiating with Waldorf and the Kenyan about dessert and electronics!”  I love the name Chase. Now, had I known that this child would live up to his name in the literal sense, I would have named him Sit Down Quietly for Long Periods of Time. Kidding, I wouldn’t change a thing about him. His three older brothers are in love with the Verb. And so are his parents. His scratchy little voice, sweaty little curls and 3 year old temper tantrums have been a source of amusement for all of us. Typically, the first name he calls in the morning is that of the Interrogator’s.  It makes me smile. I am glad our little Verb exists in the world to be the #1 fan of the Interrogator.

B&B is my husband. The summer I met the very tan, extremely cocky boy that I would eventually marry, I described him to a good friend as “tall, dark and handsome”. A few months later, the same friend hosted a dinner at his home. My place card read, “Beth”. Tall, dark and handsome’s read “Big and Black”.  Perfect. Being a good parent is hard. Being a good spouse is harder. I think your spouse should be your best friend. When we got married (a long time ago in a galaxy far, far away), we were two young, naïve, overly tan, early 20 something’s in love and filled with hope about the great unknown til death do us part. But, B&B and I were not best friends. Many years and almost as many kids later, I can say I am married to my best friend. It hasn’t been easy. We may have had 2 consecutive hours of easy back in 1999. But it is certainly never boring.  B&B is an adrenaline junkie. He is wicked smart. He is passionate. He is emotional. He is persistent, at times bordering on stalker. He is a spectacular athlete with the lungs of Lance Armstrong. He is argumentative. He is supportive. He is effusive with his compliments. He is a terrible singer and a terrific dancer. He is competitive. He is forgiving. He is as moody as a 15 year old girl. He is self-reflective and wants to be better. There are 3 words he pushes me to say. They make me cringe. “I was wrong.” Ouch! Even worse, “I am sorry!” Blah! I am a Taurus, so I am rarely wrong and hardly ever have anything for which to apologize. And he is a Gemini, which means ½ the time he is batshit crazy. But during his lucid periods, he calls me on my crap. And he makes me say the 3 words. And it makes me a better person. And a better wife. And a better Mom. He is my parachute, and I choose him in the foxhole over anyone else. There would be arguing in that foxhole, but B&B would be right there with me. 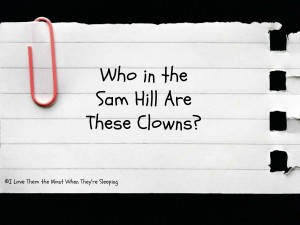 26 thoughts on “Who Are These Clowns?”