87 days of no alarm clocks.

87 days of ice cream every day…sometimes twice a day.

87 days of my living room sofa doubling as a fort.

87 days threatening, through clenched teeth, to take away electronics for the remainder of the 87 days “if you tease your brother one more time”.

87 days realizing too late that I should have reapplied.

87 days listening to Mommy’s music and mastering which songs can be sung at home but never in school.

87 days of the A/C running all day and fans in bedroom windows all night.

87 days praying we’ll be invited back again after the Interrogator shatters their glass-top table 3 minutes after our arrival.

87 days visiting with Little Sister, Fly Boy, and their 3 adorable kids, who annually swap the heat of the Arizona desert for summers on the East Coast.

87 days cooking 40 chicken nuggets at a time to feed her kids and mine.

87 days of sand in their peanut butter and jelly sandwiches.

87 days sitting at the baby pool. For the 11th consecutive summer.

87 days counting their heads at that pool.

87 days celebrating because 3 of my kids can swim.

87 days of my heart in my throat because 1 of my kids cannot yet swim.

87 days having every intention to set up a playdate, but never following through with my plans.

87 days spent cursing the bra inserts of my bathing suits for their ability to hold that bloody crease right down the center.

87 days angrily removing the bra inserts from my bathing suit only to realize that the creased inserts are far more aesthetically pleasing than the real deal.

87 days vowing that next summer I will look like one of those chicks in the Athleta catalog.

87 days donning a bathing suit with a skirt because this summer I do not look like one of those chicks in the Athleta catalog.

87 days of the tent slowly killing a rectangular patch of grass in our backyard.

87 days cleaning the sticky sugar from the popsicles consumed, against my rules, in that tent.

87 days skipping a bath because chlorine kills everything. 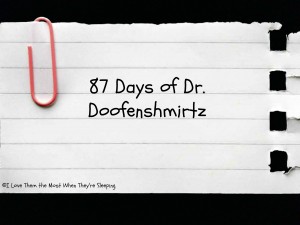 87 days having no luck finding a babysitter for a concert whose tickets we purchased 4 months ago.

87 days of suicide watch as a result of winning nothing but 22 stinkin’ donuts while participating in Acme’s Sizzlin’ Summer Giveaway.

87 days spent on the beach reconnecting with cousins visiting from Texas and Georgia…and marveling at our kids’ long limbs and growing friendships.

87 days of “I probably shouldn’t, but it’s summer so what the hell, I’ll have another.”

87 days of my heart ready to burst as their bonds grow stronger.

87 days allowing Waldorf and the Kenyan the freedom to ride their bikes through the neighborhood.

87 days of apprehension awaiting their safe return home on those bikes.

87 days envying my friends whose kids are attending sleep away camp.

87 days dragging 4 kids through the Acme several times a week.

87 days of endless material about which to write.

87 days wondering when exactly I will find the time to write.

87 days interrupted by one glorious girls’ weekend during which I plan to take the Princeton…and Circle Pizza…by storm.

87 days teaching my kids to boogie board and body surf.

87 days holding my breath while B&B teaches them, against my better judgment, to flip off the diving board.

87 days driving them to the empty beaches of Strathmere, where I’ll spend yet another summer not sitting and not reading.

87 days playing frisbee, run the bases, and paddleball on those empty beaches of Strathmere. And not giving a rat’s ass that it’s been 11 years since I last sat on the beach and read a book.

87 days digging a 4 foot hole in the sand because the kids asked for a DEEP hole…and because I know it’s the only exercise I’ll get all day, so I’d better make it count if I’m eating ice cream twice today.

87 days swearing that next year they are ALL going to camp. ALL SUMMER LONG.

87 days knowing that I’ll need to wrap my leg around the stripper pole to afford to send all 4 of them to camp ALL SUMMER LONG.

87 days of weeding that I never get around to doing.

87 days of laundry needing folding that can sit one more day if the right episode of Scooby Doo demands my undivided attention.

87 days having my ass handed to my by a 3 year old while playing Just Dance 3. And Mario Kart.

87 days of Busch’s She Crab soup available only on Sunday and Tuesday.

87 days bumping into old friends at the shore.

87 days doing shots to celebrate bumping into old friends at the shore.

87 days paying for those celebratory shots the next day on the beach with the kids.

87 days wishing B&B were a teacher.

87 days thanking God B&B is not a teacher after spending 3 consecutive days in his company.

87 days vowing that next school year I’ll be my most organized.

87 days promising the kids we’ll accomplish everything on their to do lists.

87 days realizing we haven’t accomplished one item on their to do lists.

87 days living simply in comparison to most of their friends. And most of our friends.

87 days of gratitude that Dad has lived another year cancer free.

87 days until, for the very first time, every one of my kids is in school. Full time.

87 days wishing I could freeze time.

87 days to make memories with them that l hope will last a lifetime.

87 days wondering whether someday they’ll want to make those same memories with their children.

And bring with it a very large pitcher of your finest margaritas.